All Collections
Hosting your videos
Draft, embedded, published: what are the different states of video in Wave.video?

Draft, embedded, published: what are the different states of video in Wave.video?

Learn more about each state and how they work together.

Written by Kate
Updated over a week ago

There are several states that one video can be in Wave.video: draft, embedded, or not particular state at all. Let's take a closer look at each one of them.

When you create a video in Wave.video, it automatically appears on the page "My videos". By default, it doesn't have any special "state". The preview of such a video will look like this: 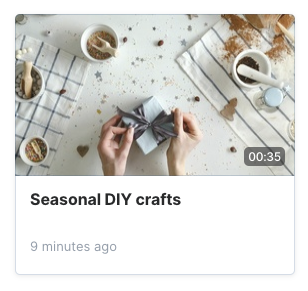 Notice how the preview only has the name of the video as well as the time stamp when the video was last edited. All changes to the video are saved automatically.

Please note: just by looking at the preview, you won't know whether the video has been rendered or not. If you want to embed it, you will have to render it first. You can do it in the editor on the step "Publish".

A "draft" means that the video has been edited but the changes haven't been rendered yet. You will know the video is in draft when it has this sign: 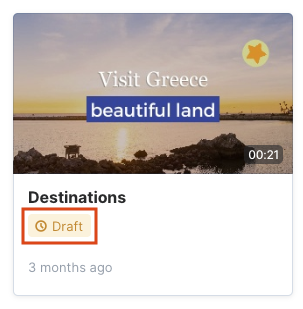 This means that all the changes that you have made in the video are all saved in the editor. But in order to be able to share them with the world, you'll have to render your video first.

Once the video has been rendered, it will turn to the state "No particular state" (see above).

When you turn on the embed link for a video, it gets the sign "Embedded" on the preview. Like this: 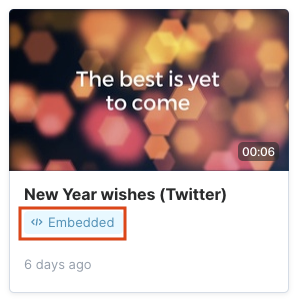 Each plan in Wave.video has a certain number of embedded videos included. Learn more about the different pricing options on the pricing page.

A combination of different states

In some cases, you can also see a combination of different states on one video. For instance, a video can have both signs - Draft and Embedded. 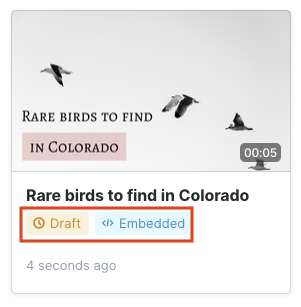 What this means is that the video has been rendered and embedded, i.e. the embed link has been turned on (because you can only embed a rendered video).

Whatever changes you have made to the already rendered video, they will not be displayed in any places where the video is embedded.

For instance, if you embed a video on a landing page and then make some changes, you will first need to render the video. Otherwise, the changes won't be visible in that embedded video on the landing page.

Still have questions? Contact us at support@wave.video. We'll be happy to help!

Did this answer your question?