How to Create a Video Introduction That Hooks Your Audience

That’s all the time you have got to hook your audience before they move on to another video.

If you miss your chance to impress and engage your viewer in this short period, you won’t have another shot.

How can you engage your audience in such a short amount of time?

Let’s take a look at five techniques you can use to write a video introduction that hooks your audience right away.

1. Create a Curiosity Gap with Your Video Intro

Your video has something that your viewers want; it’s what makes your viewers click on your video when they see it on their screens. Business people call this your “value proposition”— the value your video promises them.

Your video’s value proposition could be

In any case, before you sit down to write your video introduction, make sure to figure out what it is.

Before you sit down to write your video introduction, make sure to figure out the value proposition of your video.

Once you have figured it out, you want to tease the viewer with what marketers call a curiosity gap — the difference between what your viewer knows and what they want to know.

9 Hacks on How to Make Your Video “Clickable”

As the name suggests, a curiosity gap makes the viewer curious about your video’s premise—you can already trigger that feeling through the title and thumbnail—without revealing what is.

Bloomberg’s following video creates a curiosity gap right from the title and thumbnail — you may guess what city it is, but it’s not easy to figure out. The video starts by mentioning the city the video refers to — Mexico City — while showing one of the city’s main landmarks. By the time you click the video to figure out the city from the story, it’s already too late; the story has hooked you.

The key to creating a powerful curiosity gap is to delay your video’s main idea while assuming they are familiar and knowledgeable about your video’s topic and build your introduction from there.

Think of it as the experience of opening a Kinder Surprise or a McDonald’s Happy Meal — kids love to buy them because they know they will get a toy, except that you didn’t know which one.

The following video from Vox uses an interesting headline by referring to services we all know—Netflix—but shocks you in the last part of the headline when it says—“all without the internet.”

The first 30 seconds mix images of Cuba, the country where this mysterious service is based, with the narrator talking about the ease of using Netflix and other streaming services. Suddenly, the narrator asks, how do these services work in an authoritarian country like Cuba?

It’s important to balance the feeling the curiosity gap creates so you don’t confuse them; if you play too hard to get, it will feel condescending — i.e., you will make them feel like they’re not smart — thus destroying any chance of engaging them.

You already know the attention span of the average viewer is short. As such, your video introduction should go straight to the point, showing the viewer what they will learn in the video.

One popular way to introduce your video’s central premise from the start is to use what’s known as “Aristotle’s technique,” or, as philosophers call it, the “Aristotelian triptych.”

Leaving all the philosophical ideas behind, Aristotle’s technique is a three-part technique public speakers and content writers use to present an argument.

Here’s how it works:

Here’s one example from Tim Schmoyer from Video Creators, who uses the first seconds to give background to the video’s topic, and then he explains what he will talk about in the rest of it.

Aristotle’s technique is particularly useful when creating tutorials and technical videos where clarity of thought is paramount. The best part is, it’s incredibly easy to implement; all you do is explain what the video is about.

3. Tell Them a Story

It’s no secret to say that people like storytelling, especially when it comes to video format. A comparison between the films released over the last 100 years shows that almost the majority of the movies have been fictionalized stories, with non-fiction documentaries representing a negligible part of the industry. 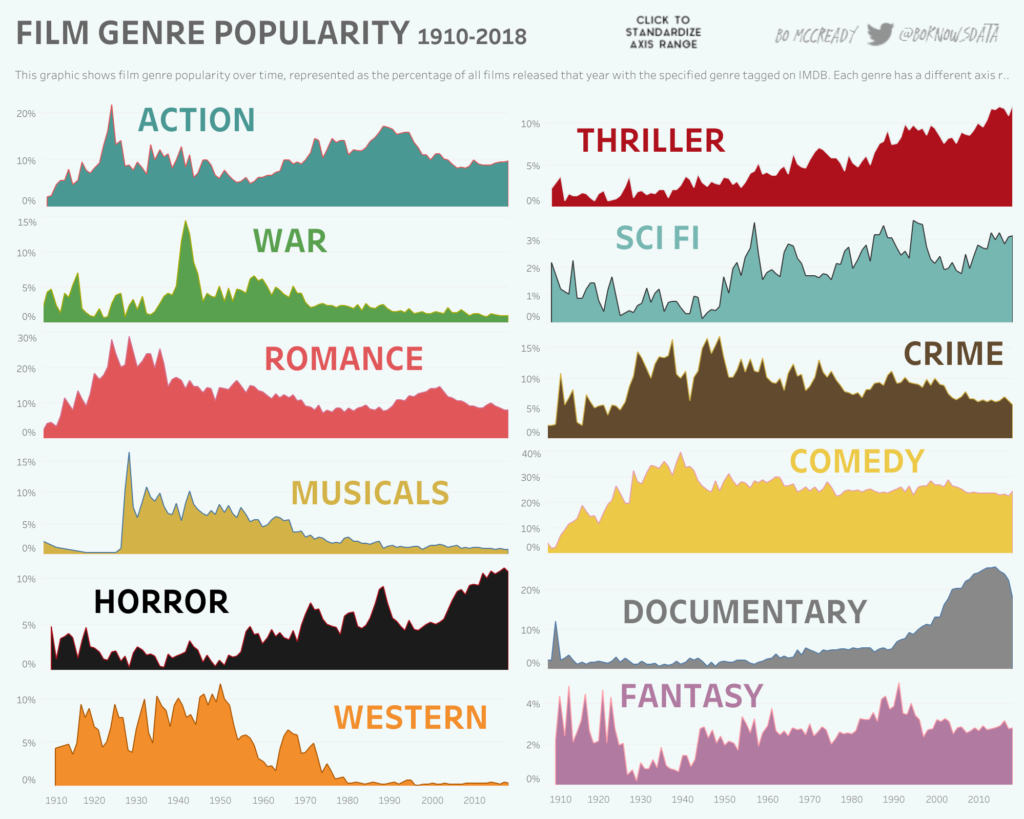 That’s to say that telling your viewers a story is a guaranteed way to hook them before they can click away. The question is, how do you create a story quickly?

Telling your viewers a story is a guaranteed way to hook them before they can click away.

It turns out, you can use the S.I.C. storytelling formula, the technique writers use to develop a story in a few paragraphs. Here’s how it works:

Wendover Productions is a channel that covers topics on “how the world works.” Sam Denby, the host, covers “boring” topics like airports, shipping, and logistics, yet the channel has over 2.70 million subscribers. How does he manage to get such an immense following? By telling stories.

Ask yourself, “what’s the story behind my video?” There’s always a character — real or invented— that your video can relate to; find that character, the problems they faced, and show them in your introduction.

4. Show a Preview in Your Video Introduction

Your video title and thumbnail play a key role in hooking your viewer, which is what the Bloomberg example illustrated. Marketers call this “click-bait:” you spike your viewer’s interest and promise something that seems shocking, interesting, or unique.

11 Easy Ingredients of a Clickbait Thumbnail

The problem is, your promises can quickly fall short if you don’t use that initial interest to hook them. Your video introduction must prove that your video will show your viewers something of worth; otherwise, you will lose them.

Your video introduction must prove that your video will show your viewers something of worth; otherwise, you will lose them.

Start by showing a preview of the most important, shocking, or interesting part of the video, especially if that preview connects to the video’s thumbnail and/or title.

Casey Neistat, one of YouTube’s foremost influencers, always uses previews, both in his videos’ thumbnails as well as in the intro. The following video covers his traveling experience in a $21,000 plane ticket, Casey starts with a seemingly random yet fascinating question.

15 seconds later, he shows a card where he explains what the video is all about—how he got the ticket and the travel itinerary. Once he has hooked the viewer with an exciting preview and some background information, he starts the video at the beginning of the story.

Video previews are effective when the video shows a fun, fascinating, or awe-inspiring clip from your video, like in Niestait’s video.

Here’re some more tips on how to make your video thumbnail do its best.

5. Create a Video Introduction That Makes Them Laugh

One of the main benefits videos have over text is that they allow for a much greater range of emotions. The more emotions you can elicit in the viewer, the more you will engage them.

From the unlimited number of emotions available, laughter is one of the most essential human traits you can use in your videos. Laughter creates an emotional bond between the viewers, among a large array of benefits.

Starting your videos with a laugh is a guaranteed way of engaging your viewers quickly, which explains why some of YouTube’s most popular videos are bloopers and other funny clips.

Here’s how you can create a funny video introduction:

Humor is all about breaking your viewers’ expectations.

Consider Groucho Marx’s famous quote: “Those are my principles, and if you don’t like them… well, I have others.”

What makes it funny is the pun after the ellipsis; it’s the unexpected and unapologetic lack of morals Groucho claims to have that makes his joke funny.

When you write your video introduction, ask yourself, “what’s the expectation your viewers have about the topic of your video?” Take it and flip it over its head.

In the first 25 seconds of the following video, the narrator—which happens to be called “Sciencephile the AI” and uses an artificial voice generator to narrate the script—builds momentum around the complexity of the video’s subject.

At first, you’d think Sciencephile the AI is referring to physics, as the video’s title suggests the video is about. But then, he breaks the expectations with some funny remarks.

There’s no better way to use humor than to show your viewer that you, the host, are just like them. We are all drawn to think that whoever speaks to use in a video—or presentation, for what it’s worth — is an authority.

Use that bias we all have embedded to laugh at yourself. It will break the ice between the viewer and you, and you will gain their respect.

Joe Scott has built a large YouTube channel covering mostly science topics while using a mix of self-deprecating jokes, weird faces, and awkward silences. He has even created a “character” around himself, which makes his videos unique and funny.

Whether this  “character” is real or not is irrelevant; these attributes make his videos funny and engaging, even when he covers complex topics.

Exaggeration, or “hyperbole,” is a comedic device comedians use to make fun of a commonly accepted situation or idea. By exaggerating this idea, you are implicitly telling your viewers that you both know what or who you are talking about. This makes the viewer feel special and unique, something that builds trust between the viewer and yourself.

Jeff Nippard is a fitness expert who publishes videos on muscle building. In the following video, he parodies the “bro culture” that, after the global lockdown, started creating videos on training at home.

The first few videos already start by having Jeff sip coke (which is a common joke among fitness enthusiasts as something a beginner would do) and other ridiculous exercises, like “sip curls”—bicep curls done with milk jugs while drinking the milk at the same time.

Hook Your Audience with Your Video Introduction

With these five techniques, you will not write your video introductions like you did before. Now you know that catching your viewer’s attention early in your video is critical to engage them and increase your audience retention.

Find the right curiosity gap, introduce it fast, mix it with a story, and a funny remark, and you will hook them right away. Which of these five techniques are you going to use in your next video introduction?

Also, if you’re looking for an easy-to-use video intro creator – try Wave.video! You won’t regret it, we promise.

4 Easiest Video Editing Apps You Could Ever Use