How to Create Social Media Videos That Hold Viewers’ Attention

I confess: I’m obsessed with toothpaste and toilet paper—two products most marketers would label “boring as hell.”

This obsession has led me to study what makes brands boring or interesting—or more specifically, what makes a brand’s video marketing campaign boring or interesting. Based on what I’ve seen, I’ve come up with a checklist to help you create social media videos that are—whether your brand is inherently hot, or not—super compelling and share-worthy.

Here are the 5 Do’s and Dont’s of my findings:

Confidence in taking risks is critical to eliciting and managing creativity. One question I like to ask my marketing team is: “What would happen if…?”

In an if-averse risk-averse marketing department, results are all that matters. In this type of environment, not only is curiosity stifled—because the eye is trained directly on one prize only—but the fear of failure is heightened as well. Give yourself and your marketing department ample room to “try stuff,” and learn from mistakes.

Banana Republic showcases a variety of ridiculously good looking models, wearing their clothes, and traveling to a pretty place. In this clip, nothing is said and nothing happens, other than the wind blows and the beautiful people seemingly all end up in the same house. What’s risky about that?

Takeaway: Nothing is at stake for beautiful pensive people wearing neutral-colored clothes. One of the models could have at least parachuted in!

Patagonia’s Vote Our Planet campaign, which its spokespeople call “bipartisan,” marks its clearest messaging about the company’s active role in fighting climate change and environmental degradation. Patagonia is determinedly pro-science, and Patagonia’s vice president of environmental activism, Lisa Pike Sheehy, says in an interview in Think Progress, “There is the risk of losing customers, because some people are not going to agree with us on this. But we really feel a strong sense of responsibility here that the biggest risk would be doing nothing, saying nothing.”

Tormund gets his message across, and O, Brienne of Tarth, we love the shade you give, but that roll of the eyes is one gesture we never want to elicit from our audience—which takes us to one of our favorite mantras about messaging:

Unless you’re selling cheese, don’t be cheesy! When figuring out what message to send, who should come before what; that is, the customer always comes first. Determine who your audience is before figuring out what they want to see and hear in relation to your product.

Takeaway: Recall this Superman 2 scene (did you catch the KFC?) and vow to eliminate the hard sell—aka evil—from planet Earth!

2. DO promote message before product (MBP)

Lowe’s tells us to “Never Stop Improving,” and several years ago, they did just that, by putting their marketing money where their mouth is. Spending only $5000 on their “Fix in Six” video series on Vine, they shocked even themselves with their ROI and a prestigious 2014 Cannes Lion for BBDO award. Even their video about their Vine videos conveys a sense of hands-on innovation and infectious can-do pride.

Takeaway: When you believe in your brand, practice what you preach, and genuinely aim to improve people’s lives, your brand will speak for itself—it won’t need to show off to attract loads of attention.

Here’s a great example of how even the biggest brightest brands can lose. In 2017, no company got more flack for missing its mark than Pepsi. In trying to salute protests in a year that promised many people taking to the streets for multiple complex reasons, Pepsi’s Kendall Jenner ad failed with its vagueness, which thousands of people labeled “weak,” “insulting,” and “inauthentic.” The soda giant apologized and pulled the ad, but the damage was done.

Takeaway: Never try to please all the people all the time, because you can’t.

In January 2017, while the US President was looking to gain popularity points with his Muslim Ban, taxi drivers in NYC called for a strike, asking Uber and Lyft drivers to join them. Uber promised reduced rates, but no strike. Lyft, on the other hand, stood with taxi drivers—against the ban—issuing this statement on their blog: 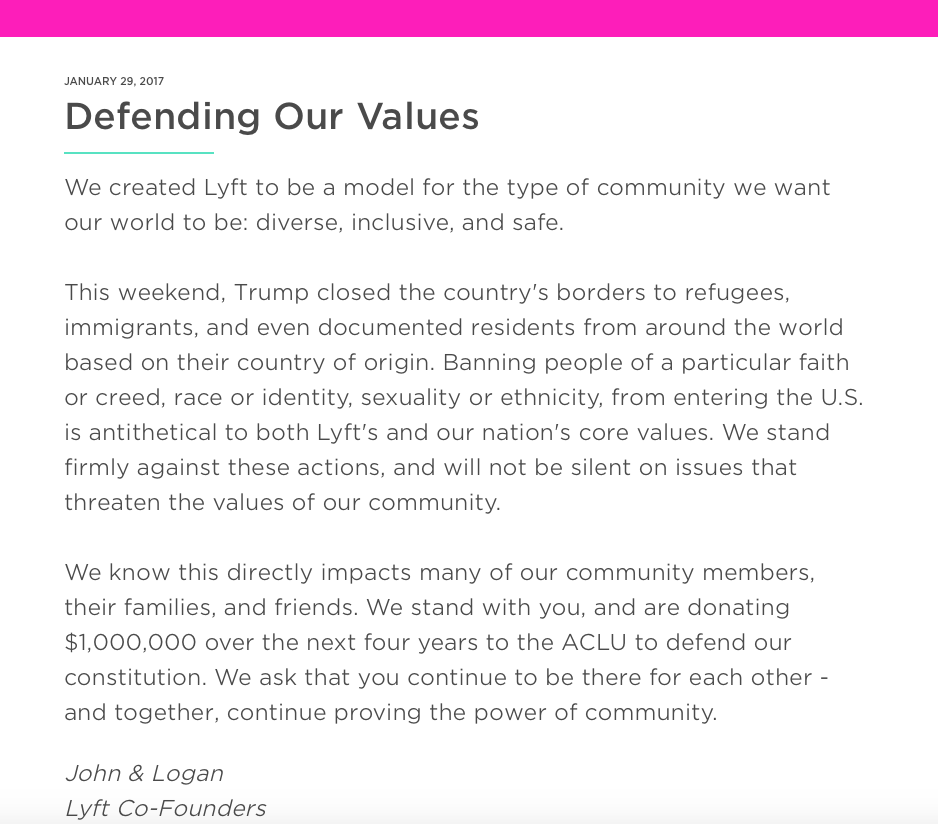 In 2017, Uber came under fire for other revelations about its company culture, and Lyft shifted into a higher gear, but it seems that Lyft has always been user-friendly, employee-friendly, and aware.

Takeaway: Open your eyes and ears beyond your immediate spheres of influence/main audience. Do your research and testing! Do good ~ #thinkethics!

If Strategy X is working for everyone else in your industry, why shouldn’t you implement Strategy X too? Because if you do, you’ll never rise above the fray. If you take your company’s marketing videos and replace the logo (and a few keywords in captions) to that of one of your competitors, does your video still make sense? Nine times out of ten, the answer is yes, because we have lots in common with our competition. But it’s the marketing team’s job to make our brand stand out, and we can only do this by whipping up totally unique and entertaining stories.

Let’s agree to put every airline safety video, except for that of Virgin Airlines, in this category.

Takeaway: Follow your competition, but don’t be a follower. Differentiate yourself, or people will tune out, like you always do on an airplane as soon as the flight attendant starts in on seat belts.

2. DO be completely unique

Virgin Airlines Safety Video is a long one (4:59), but isn’t your life worth it?

If you flew Virgin Airlines when this video first came out, you likely watched with raised eyebrows and LOL’ed. You may have shared a “job well done” nod with the flight attendants. What a relief it was for them as well, not to have to have to explain how to fasten a seat belt!

Takeaway: Wherever you see the crowd heading or getting stuck, turn the opposite way. This Virgin Airlines safety video now has close to 13M views on YouTube, and the main reason is because it blasted into a social space that has become less and less enjoyable—the airplane—and treated its audience with a comedy club Broadway-esque routine. It was entirely refreshing, even to the most cynical of passengers.

Being Factual versus Funny or Emotional

In college, there was always one jerk in every class, and one professor who reveled in answering that jerk’s every question, droning on and on, loving the sound of his own voice. Everyone knew this professor was brilliant, but nobody could stay energized long enough in his presence to care. Then there was the other genius professor, who understood the power of laughter to open all brain synapses and engage people. This professor understood the power of story to convey knowledge. We knew which professor got better reviews.

Progressive Insurance agent Flo is annoying, which isn’t as bad as boring, because at least people are talking about her—but still…

2. DO hit the funny bone and/or emotional center

Let’s face it, Leica cameras fall instantly into “sexy” territory—owning one is every photographer’s dream. But the brand outdid itself in 2014 (we are still talking about it) with their near-45-minute advertisement: “The Most Boring Ad Ever Made.”

And because wooing an audience emotionally weighs heavily on all of our minds—and because I’m obsessed with toilet paper—I want to share this video too:

Takeaway: Wink at your audience, give them props for not wanting to be “that guy,” i.e. for not being the one that always goes for, in Leica-speak, “the closest biscuit on the plate.” Leica knows 0.5 people out of 10.5 will make it to the end of their video, and they don’t care. They’ve dropped the marketing ruse, they’re a camera company that’s gotten naked for all to see, and for that, their desirability factor soars higher and wider. Alternately, honor your audience for being “that guy,” i.e. the father with the strong but comforting presence.

Stories that connect with people encourage them, literally, to connect with your product and brand. No matter what you’re marketing, you’ve got to find a way to reach beyond love or need of your product; you have to surround your product (or service) with a compelling story.

You might think that compelling stories can only be created for the “sexy/fun” industries and brands: clothing, cars, booze, and high-tech gadgets (think Go-Pro). You might believe the “boring” industries and brands—insurance, cable, batteries, home cleaning, and repair, etc.—are doomed to being eternally ho-hum.

But the truth is: No brand under the sun is doomed to being dull!

We’ve talked in other blog posts about optimal social media video length and how many seconds you have to hook viewers. We’ve written about creating videos on a budget. Clearly, Pepsi, Lyft, Leica, Virgin Airlines, and the insurance giants have a social media video budget that exceeds most marketing department resources. That said, with tools like Animatron’s Wave, you can make unique, funny, woke, message-led, and opinionated (sassy, controversial, provocative) videos quickly and easily. You’ll have support too, with our tutorials and fun and informational blog posts.

Sell your audience those pencils and HVACs; be brilliant and daring, and then sit back and watch people Like, Revine, or Loop your 6-second anti-smoking video thousands and thousands of times.

How to Go Live on Instagram on Your Computer