How to Create a Killer Explainer Video Script [+Free Template]

To make a great film you need three things – the script, the script and the script.

Probably, we shouldn’t argue with the master, and better take his word for it. To create a video of any kind you need to write a script first. And this effort always pays off.

Although you  ain’t going to create Vertigo-like movies for your marketing campaigns, the importance of thorough planning and screenplay writing doesn’t go anywhere. The script is a backbone for your video, your time-saver and cost-cutter.

The script is a backbone for your video, your time-saver and cost-cutter.

In this article, we’ll explain

What is a video script and why do you need it?

Video script is a document that comprises a chronological run-down of scenes, shots, actions and dialogues specifying who is saying and doing what and when.

Plus, it features all other elements such as

By the way, every single detail does.

You might wonder, why to create a video script if you know your business and product inside and out? Why not simply grab the camera and follow the inspiration?

There are 2 main reasons why to spend time on the scriptwriting.

Reason #1. To crystallize your creative idea

You might have an idea that looks brilliant and powerful in your head.

To check it, you need to pour your thoughts out on paper or a Google doc first. Thus, you get a chance to look at it critically from various angles. Also, you’ll have something tangible to share it with others to get feedback and suggestions for improvements.

In the end, it might look very different (but way better) from what you had in mind at first.

Reason #2. To organize your production process

If video production is a journey then script is a roadmap. So, to safely get from point A (idea) to point B (publishing) you need to create a very detailed route.

Not only does the video script reflect the idea and the plot, but also serves as space to map out all resources needed to make the video happen. People, equipment, location, and many more other assets – all should be captured in the script.

The more detailed and thought-out script is, the easier you can estimate the production time and cost. For marketers, it’s crucial.

The more detailed and thought-out script is, the easier you can estimate the production time and cost.

In marketing, all content assets need to have a purpose, be it a single-word CTA, 1000-words article or a 1-minute video.

Ideally, your goals, target audience and customer journey map are enshrined in your marketing strategy that defines everything you do for the business growth.

Thus, before you put a pen to paper, hold back your inner Spielberg for a while and make sure that you have a clear vision on the following things.

Portrait your ideal customers, i.e. viewers. Who are those people? What is their problem and how your product or service can help?

“Intelligent Repurposing”: How to Reuse 1 Video a Dozen Times

Defining your goal, target audience and distribution channels will help you understand what kind of marketing video to shoot. Decide which one fits your needs better.

Last but not least. You need to have a clear perception of the resources you have. Filming an outstanding video doesn’t necessarily mean fancy locations and big budgets. On the contrary, necessity is known to be the mother of invention.

Product demos and how-to videos (or video explainers in short) tend to be amongst marketers’ favorites due to a number of reasons. 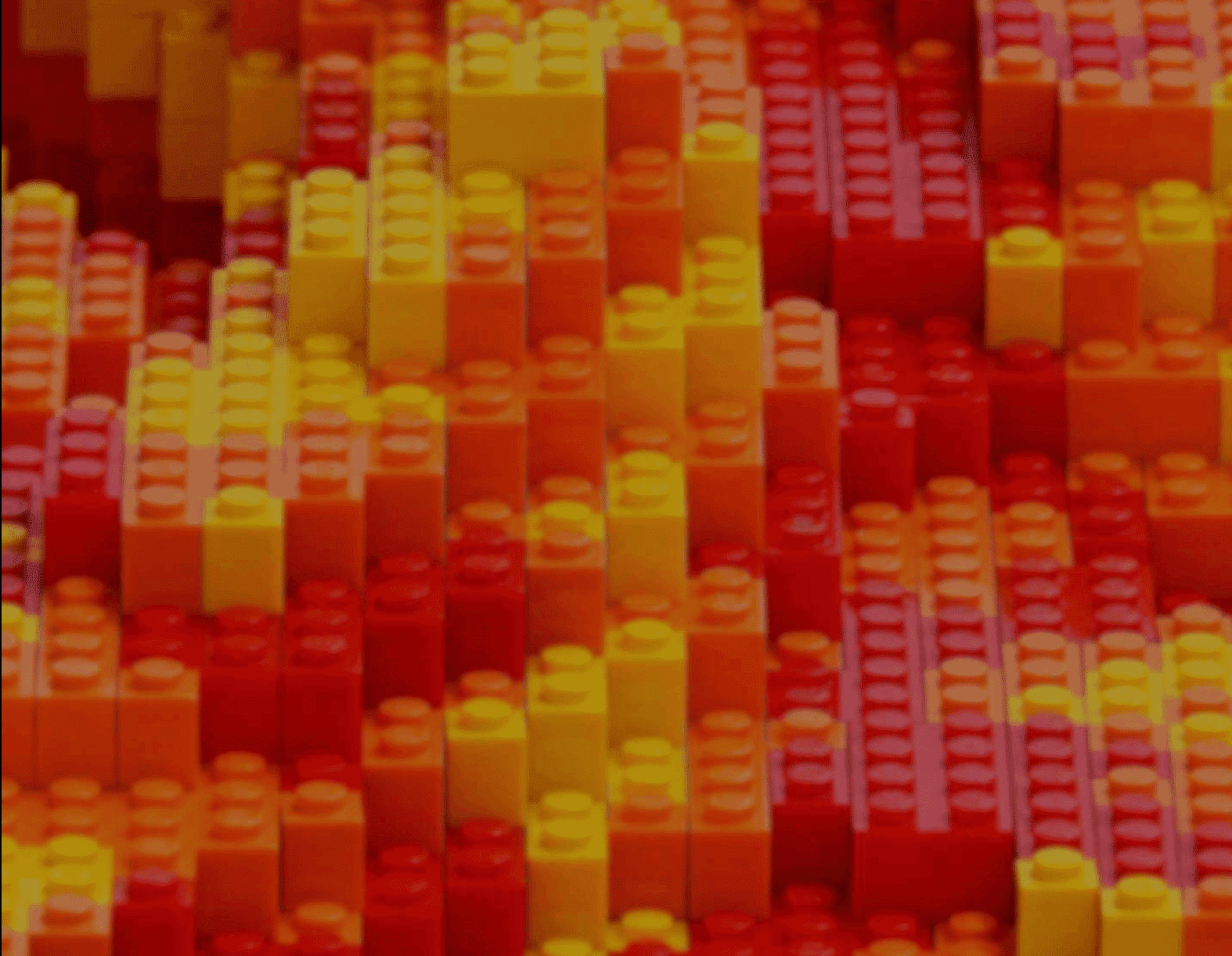 Explainer videos are good for building trustworthy relationships with your audience as people see you being eager to share expertise and willing to help.

Creating an explainer video script might seem deceptively easy as it is all about you, your brand and your product. Of course, no one else knows it better than you do. Knowing the subject is vital, but it is also important to explain it in the best possible way.

An explainer video should be brief, simple and pleasant to consume.

How to create an explainer video script

Explainer videos are made to explain something. Eureka!

Regardless of the area or industry, all explainer videos are made up of the same components:

And one more thing that makes great explainer videos so special – the idea!

Everything we do starts with an idea. So, ideas are like fish. You don’t make the fish. You catch the fish.

It is your secret sauce. It is what makes your brand unique and your video outstanding. To catch that brilliant idea and shape it into a memorable and useful explainer video, it’s good to call your teammates for a brainstorming session.

From time to time, every content creator faces a so-called syndrome of the blank page. It happens when you press ‘Create new document’ and find yourself starring at the blinking cursor not knowing what to type.

To overcome this mental numbness, bring your team together and think jointly to kick-off the creation of your video script. In this case, teamwork is much more fruitful than doing it solo. 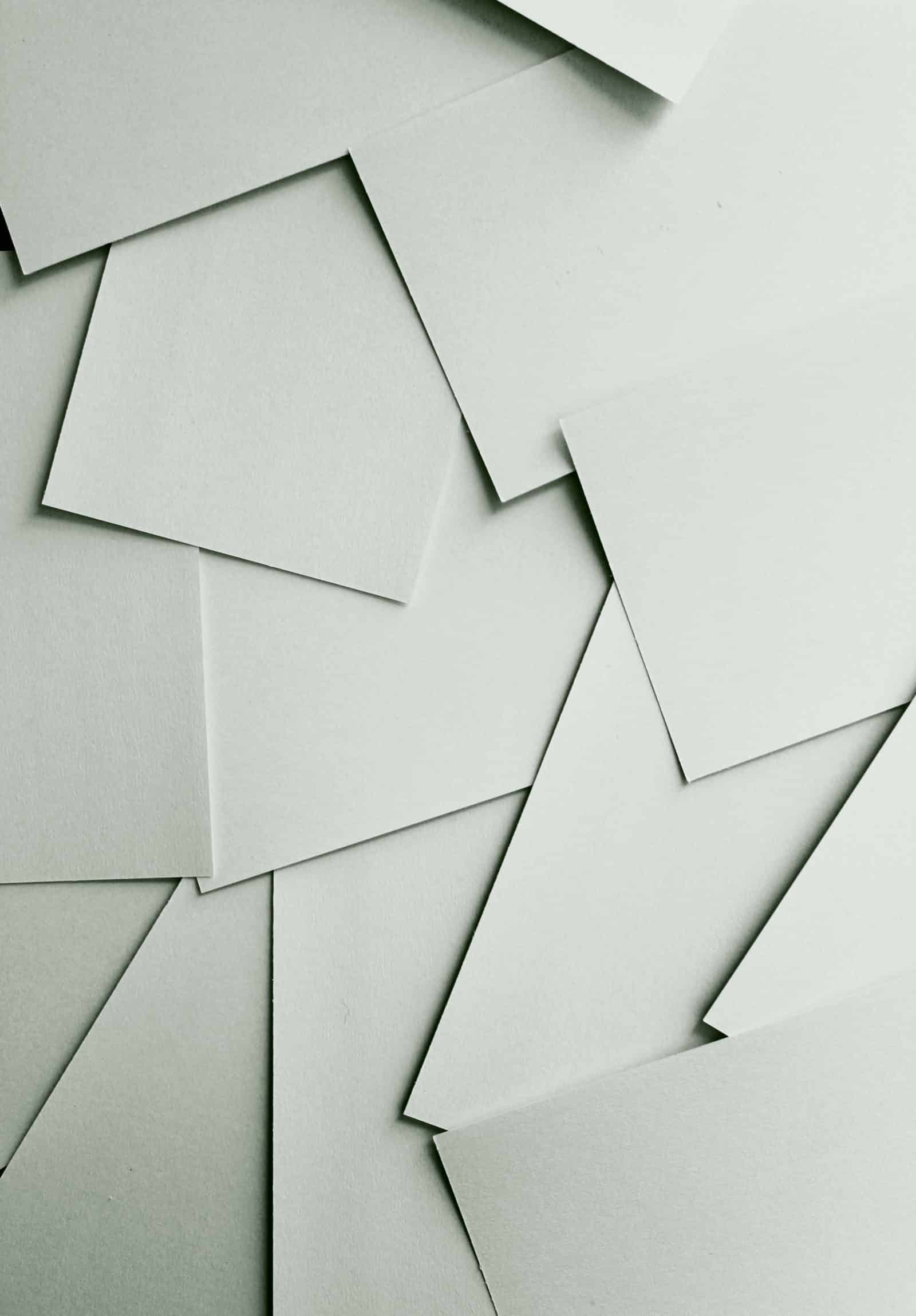 To overcome the blank page syndrome call your team for a brainstorming session and generate ideas for your video jointly.

Talk a lot. Write a lot. Ask questions. Note everything.

Usually, these conversations bring up some adjacent topics and generate more ideas that can be valuable in the future.

Plus, people might uncover some talents and skills that you didn’t know about before. Who knows, maybe someone in your team can do Morgan Freeman’s voice or can decorate a room nicely.

What you need to come up with by the end of this discussion is an outline of your video. It is your first tangible asset and the fundament to build everything else up and around.

Outlining is an invaluable phase of the scriptwriting process as it helps to organize your thoughts and structure your story. As said earlier, all explainer videos have a similar composition and are made up of 4 ingredients.

Keep in mind that all should fit in 60-90 seconds.

The very beginning of the explainer video should promise the viewer that the whole thing is worth spending time on.

It should be powerful to grab the attention and prompt enough not to sow any confusion about the topic.

Knowing your audience and their pain points is your key to creating a hook that will make people stop and watch the video to the end.

Once you’ve made a watcher curious about what’s next, state the problem you’re going to solve in this video.

You created your product or service as a solution to some specific problem, right? The trick is, some might not even think of it as a problem.

Your objective is to communicate it in a way that would touch a nerve in people. In this part of the explainer video, elaborate on how the issue negatively impacts their lives and what side-effects to expect.

Now it’s time to give your audience relief: the challenge exists, but the solution is there, too.

Present your product as the most effective means to tackle the problem and show how it actually works. Break it down piece by piece with compelling arguments, leaving no doubt that it’s you who can help and make the problem vanish.

The last ingredient to any explainer video script is the call-to-action. By the end of the video, your audience should be willing to  take necessary steps to get the cure for the pain. So don’t leave them uncertain about what to do and name one specific action to complete.

A good example is worth a thousand words, so why don’t we investigate one. Here is a recent IKEA’s video explaining their new eco-friendly approach to serving food and drinks.

Eating ice cream on the go is messy without disposables! This film introduces our new, more sustainable food containers made from only renewable materials.

Let’s review it and draw up an outline by finding all elements of a good explainer video.

Imagine a life without disposables. A bit messy perhaps.

1) They want to provide their customers with an opportunity to enjoy food and beverages on the go;

2) They are looking to minimize the ecological footprint of the company’s activities.

We need to make all our disposables better for both people and the planet.

A much more sustainable way to handle food on the go.

This explainer video is fun, descriptive and fits all 4 ingredients in 70 seconds. Well done, IKEA!

Now with all the strategic decisions made and the story outlined, you might be wondering how to actually create a video script.

The purpose of this exercise is to embody the whole story in a script, without neglecting a single word or detail. Don’t underestimate the significance of putting everything on paper, you’ll be thanking yourself for doing this later on. 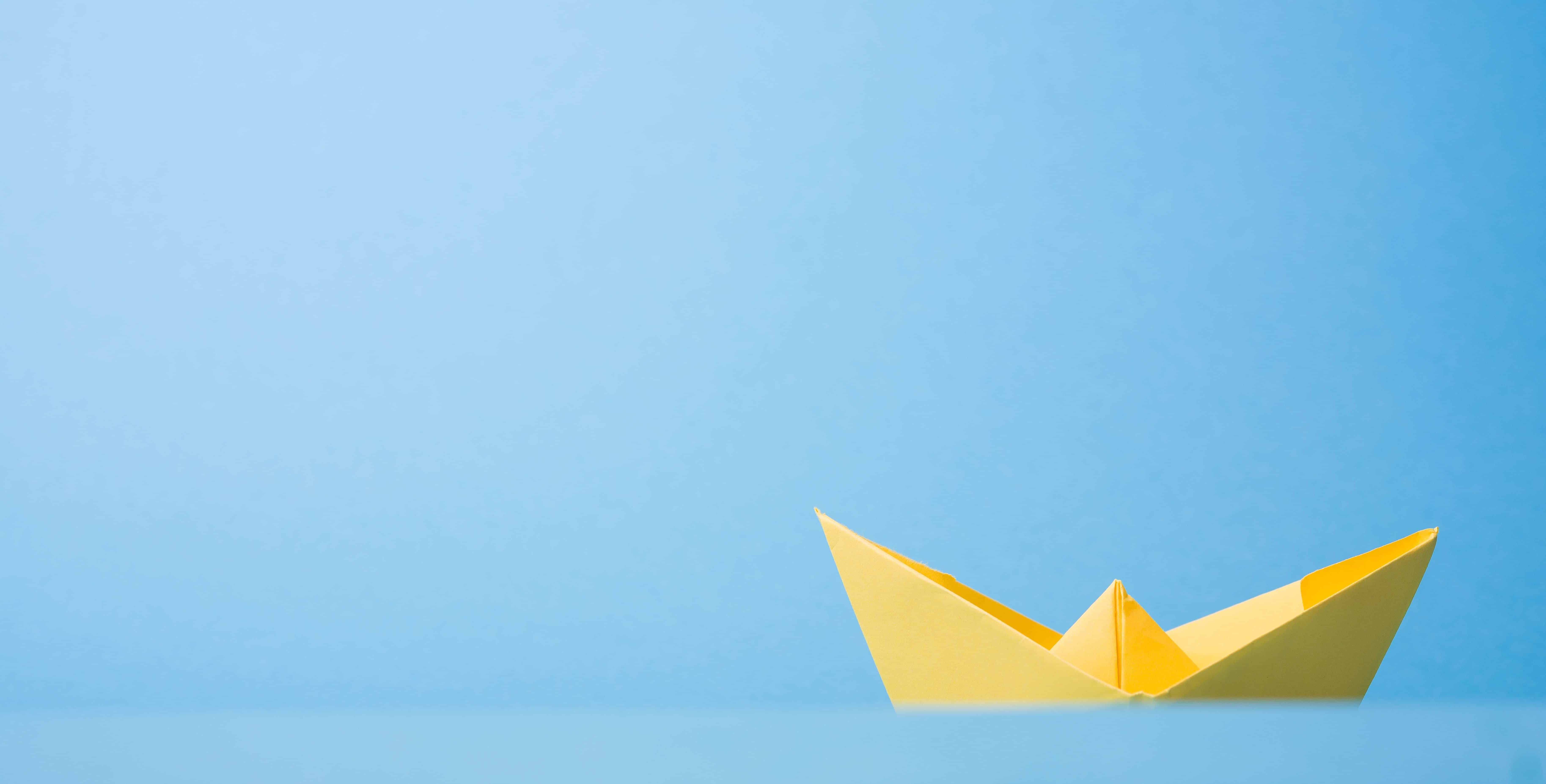 Don’t underestimate the significance of putting everything on paper, you’ll be thanking yourself for doing this later on.

Professional screenwriters use very specific and quite complicated formatting to organize their texts. They have an entire scripting language full of abbreviations, remarks, signs, font sizes and page layouts which are commonly used in the cinema industry.

Here is a sample:

Good news! You don’t need to learn all these intricate terms and acronyms. Anyways, there are some basics of screenwriting that are good to be aware of.

For creating an explainer video, you can use a simplified two-column layout to map out two interrelated components of the video: visual and audio. The idea of this approach is to simultaneously describe what should be shown on the screen and what sounds should come out of the speakers at the exact same moment.

To jumpstart your scriptwriting, use the Explainer Video Script Template.

Simply make a copy of the document, remove the sample lines from the fields and replace them with your own story following the tips in comments.

For your convenience and better orientation, we filled it in with some content from our very own explainer video about Wave Social Calendar. This one:

Wave Social Calendar: Get Your Daily Dose of Inspiration

We are proud to announce Wave Social Calendar! 👉https://goo.gl/tuJBgZ Wave Social Calendar is a free collection of social media post ideas, events, video templates, hashtags and tips that will help you come up with brilliant social content 365 days a year

Extra tips on how to make the process more efficient

Yay! The major share of the work is done.

Once you’ve filled in the blanks of the video script template with your very own content it’s time to review and rewrite it.

Here is a 5-step guide of how to do efficient script editing:

1. Read it out loud. Cut out every phrase that doesn’t serve the general purpose or doesn’t add any value. Show the draft to the team and get their feedback. Edit.

2. Tweak and shorten the sentences to make them more conversational.

3. Do a dressed rehearsal tracking the time. See if you’re within the limit. Adjust.

4. Review and polish it once again.

Now it should be good!

When looking at the final version of your first video script you realize how meaningful this exercise is. Now you have a holistic plan that incorporates both conceptual and practical sides of video production.

Go ahead and call up another briefing – with your filming crew. 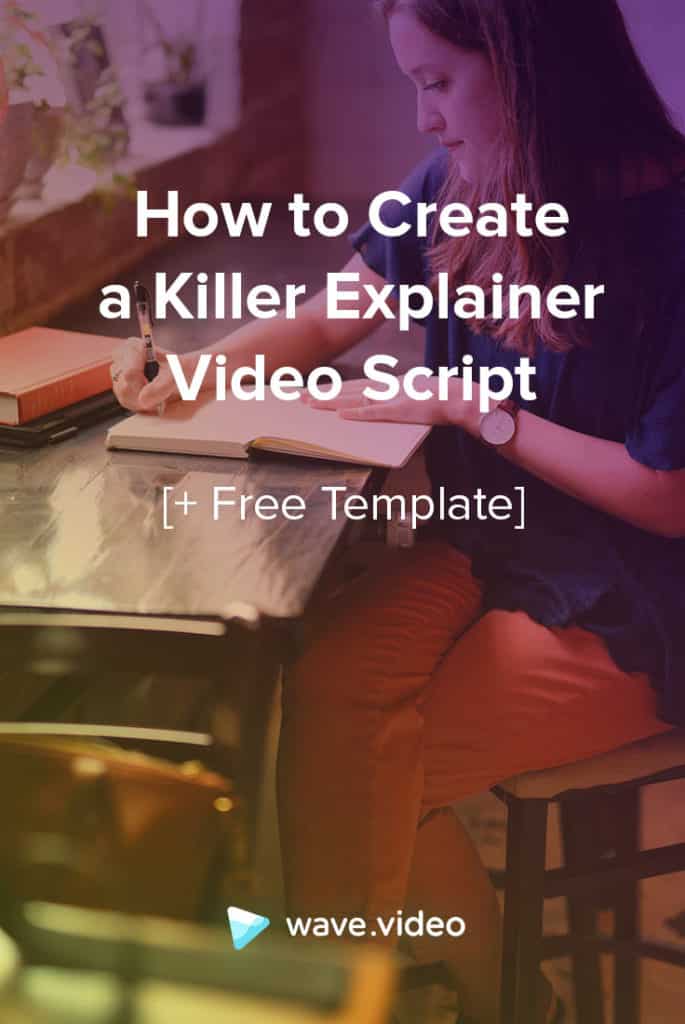 Live Video in 2020: Hottest Trends and Tips from Stephanie Liu

Logo Animation: 5 Quick Tips to Animate Your Logo without After Effects

How to Add Transparent Overlays to Style Your Videos

4 Ways to Use Videos to Grow Your Email List