What Is a Storyboard and How Can You Make One for Your Video?

Making a video can be a complicated undertaking. You’ve got to come up with a storyline, manage lots of small details, and decide how to edit the finished product. Luckily, there’s a low-tech tool that can make every aspect of video creation easier: a storyboard.

So, what is a storyboard?

Creating a storyboard simplifies every stage of making a video. You’ll be able to plan more effectively, pitch your idea to other people more clearly, and avoid problems during production. If you make any kind of business or marketing videos, storyboarding is an essential skill for you. By the time you finish reading this article, you’ll have a clear understanding what a storyboard is as well as all the knowledge you need to start storyboarding your next video.

What Is a Storyboard?

What is a storyboard and how to make one for your videos? Learn from this video.

What Is a Storyboard?

A storyboard is a visual outline for your video. It’s made up of a series of thumbnail images that convey what happens in your video, from beginning to end. It also includes notes about what’s happening in each frame. A finished storyboard looks like a comic strip.

Storyboards can be simple or complex. They’re usually hand-drawn, although some people prefer to use storyboarding software to create their images. A storyboard is similar to a script, but the two aren’t quite the same – storyboards are visual, while scripts are text-based. 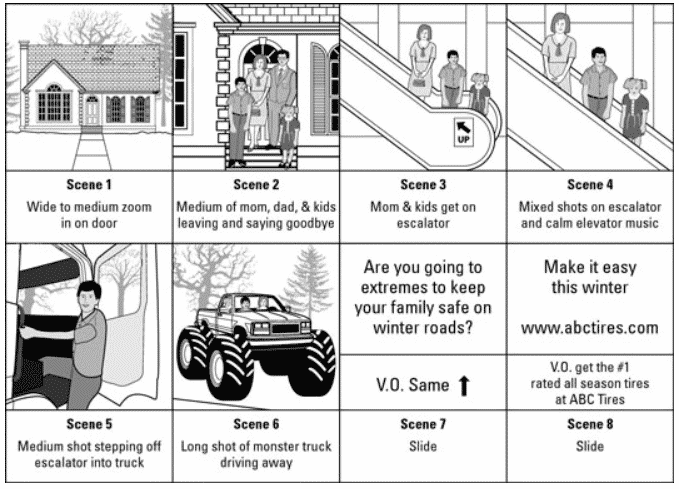 A simple example of a storyboard. Source: dummies.com

Why Do You Need a Storyboard?

Storyboarding adds an extra step to your video creation process, but it’s well worth the time and effort. Making a storyboard pays off in a number of important ways. So, if you’re still asking yourself “What is a storyboard? How can I benefit from it when making my videos?”, here are a few of the top benefits:

Which Information Should a Storyboard Contain?

Finding the right level of detail for your storyboard is important. Include too many unnecessary images, and you’ll waste time and energy that could be better spent on other details. Include too few images, though, and your storyboard might be hard for other people to follow.

The obvious answer for what to include in a storyboard: as many images as it takes to move the action forward in a way that makes sense. But the longer your video is, the harder it is to identify which details of the action are crucial and which you don’t need to draw. Even a one-minute video can pose some ambiguities during storyboarding.

But the longer your video is, the harder it is to identify which details of the action are crucial and which you don’t need to draw.

Making a few storyboards is the best way to get a feel for which information you should spell out. As you get started, keep these tips in mind.

Create the Perfect Storyboard in 7 Steps

Making your first storyboard is easier than answering the question “What is a storyboard?” (and we do hope you have it answered by now!) You don’t have to be artistic or know a lot about video to come up with a storyboard that works well. These seven steps will help you grow your seed of an idea into a finished storyboard that’s ready for production.

1. Define what you want your video to accomplish

Before you break out your drawing pencils, do some pre-planning. Start by thinking about what you want to achieve by making this video in the first place. For instance, do you want to sell more of a particular product, bolster your brand’s image, or create a training resource for employees? How do you want people to feel after watching your video? Setting clear, specific goals for your video will help you make more informed creative choices down the line.

How to Develop a Video Marketing Strategy That Brings Results

Come up with as many ideas as you can for your video. Write them all down, even the ones that seem wacky or terrible. Try combining different ideas to see what happens. After all, what is a storyboard for if not for putting all your ideas together?

If there are other people involved in making this video, have them brainstorm with you so you can bounce ideas off each other. You might be surprised at what you come up with once your creative juices get flowing. 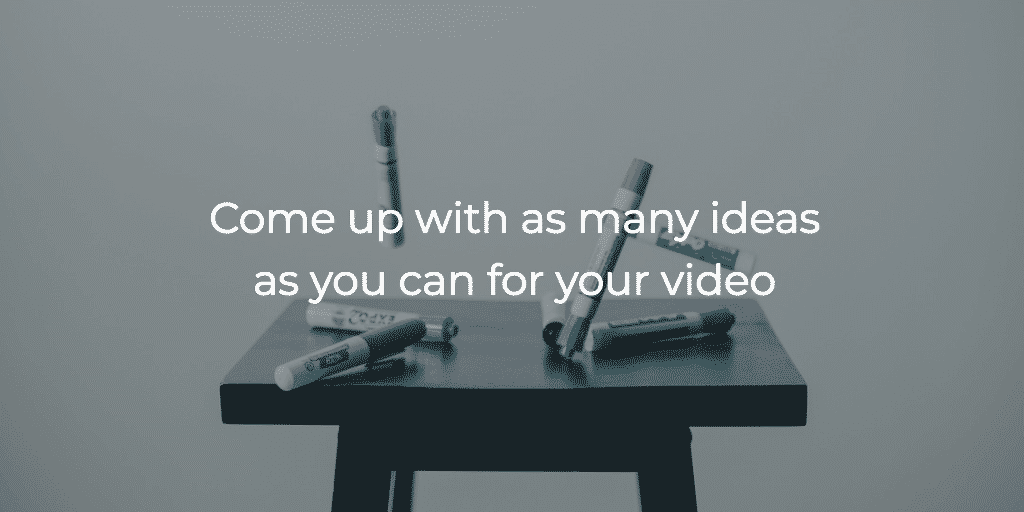 Once you’ve got a pretty good idea of what’s going to happen in your video, start sketching out a timeline. Identify your story’s beginning, middle, and end, as well as any important transitions. Make sure the idea flows well, makes sense, and has an emotional hook. A short business video doesn’t need a complicated plot, but it does need tension of some kind and a satisfying resolution. If you find gaps in your timeline, refer back to your brainstorming notes for ideas about how to fill them in.

Now it’s time to start putting your vision on paper. Draw a series of boxes on a piece of paper or grab a free storyboard template. Make sure to leave a generous amount of space for making notes. One frame at a time, start sketching out the action of your video, comic book-style.

You’ll probably find that drawing by hand is the quickest and most accurate way to get your ideas down. Practicality is more important than artistry here – if you’re not good at drawing, stick figures will work just fine. But if your drawing skills are really getting in the way of your ability to convey your ideas, you can use storyboarding software like Storyboard That to get around the problem.

Storyboard that lets you build storyboards using a library of pre-made images. Source

You’ll probably find that you want to add or change things as you go, so stay flexible and have plenty of extra paper (and a good eraser) at the ready.

If you’ve already created a script, write down the relevant part of it under each of your images. (If you don’t have a script yet, your storyboard-in-progress can help you write one.)

How to Create a Killer Explainer Video Script [+Free Template]

Add some extra notes for each thumbnail to clarify what’s going on and supply any information you’ll need during production. For instance, if you’re planning to use a voice-over or have text appear on the screen at some point in your video, you’ll want to include that information at the appropriate point in your storyboard.

If other people are helping to make this video, show them your progress and ask for feedback. Early storyboard drafts give you a great opportunity to discuss creative choices, iron out problems, and ensure that your finished video will be in line with the goals you initially set. You may even find it helpful to sit down with your colleagues and draft your storyboard as a team. 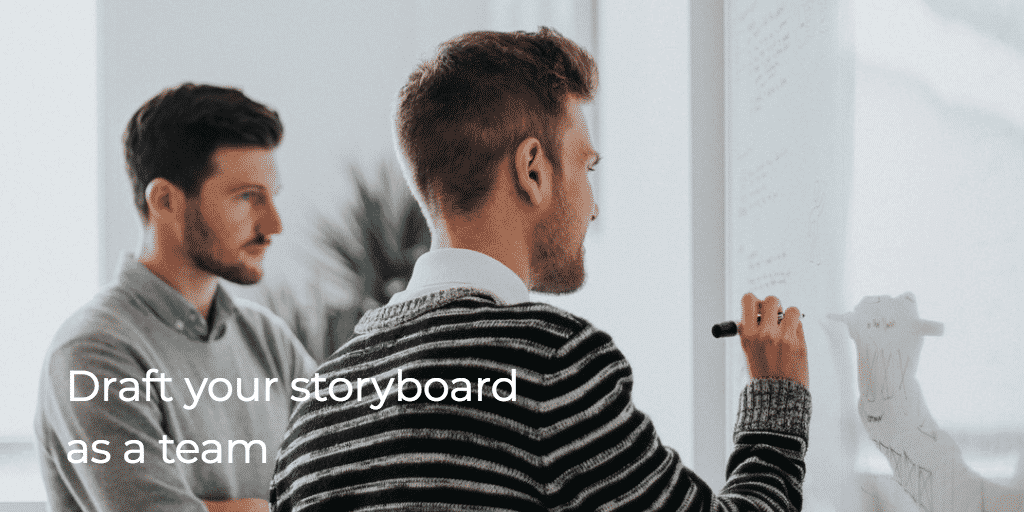 Revision is one of the most important parts of the storyboarding process. Instead of looking at revision as a chore, embrace it as an opportunity to experiment with different approaches and make your storyboard as good as it can possibly be. It’s wise to have other people on board during the revision process, so that you can give each other feedback and catch any mistakes before production starts.

Tips and Best Practices for Storyboarding

The whole point of storyboarding is to create a better video while saving yourself time and hassle, so don’t let this part of the creative process become a headache in itself. Here’s how you can create a storyboard you love as easily and efficiently as possible.

If you want to create strong videos, whether for your business or any other purpose, storyboarding is an essential step in the process. Creating a storyboard helps you iron out the wrinkles in your ideas and explain your vision to other people – and it’s fun, to boot. If you’ve never made a storyboard before, try it next time you have an idea for a video (and we hope the question “What is a storyboard?!” doesn’t make you startled any longer). You’ll probably be pleasantly surprised at how much easier the whole process of video creation becomes.

Have you found that storyboarding makes your video creation process simpler? Share your thoughts in the comments below!

Business Vlogging in 2020: Best Practices and Traps to Avoid by Rob Balasabas

Video Advertising in 2020: Techniques and Trends to Consider by Susan Wenograd